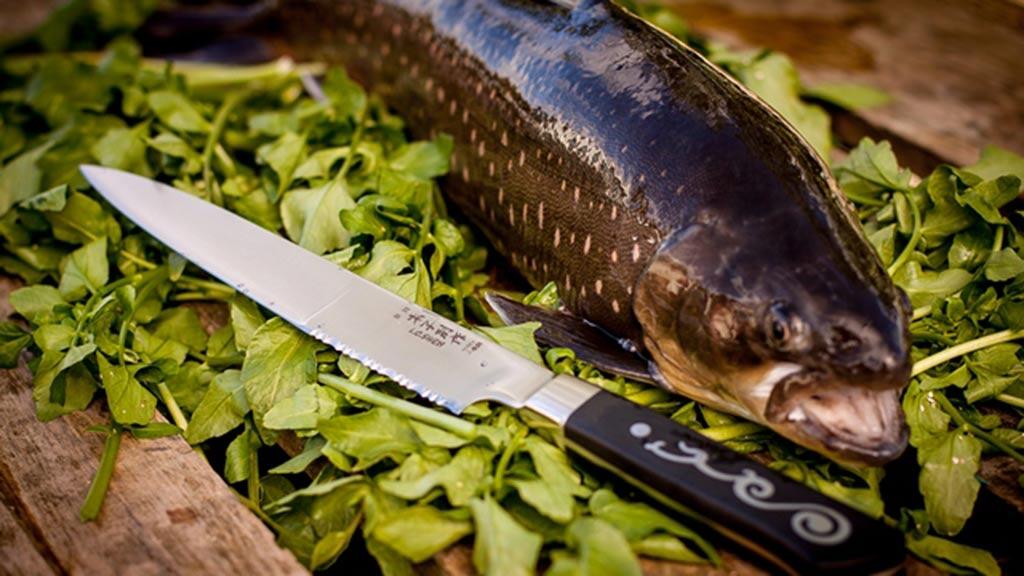 Fanfare of trumpets please! Here at Total Knife Care we’ve been waiting patiently for stock of six new IO Shen blades to arrive here in Australia, and the good news is – we’ve got ’em!

The IO Shen design team, who are based in the UK, go to great lengths to make sure that their new models are designed with professional chefs in mind. That way, even if you’re ‘only’ an enthusiastic home chef, you know that the IO Shen range will do what they need to do, and just keep going, plus are designed in a way that they are comfortable to use, even when a huge amount of chopping and cutting is required.

IO Shen has also involved a number of very high profile chefs in the UK in the design of the new knives, to make sure that they are – pardon the pun – cutting edge, and fill a gap in current knife ranges.

A focus for some of these knives is for use at the barbeque, something that is gaining in popularity in the UK, and of course here in Australia is pretty much a part of our national identity. So these barbeque knives should feel right at home here. 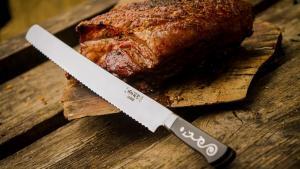 At 360mm this is a long knife. It’s designed for all sorts of uses, from slicing large cuts of meat to large breads and cakes. Two UK-based barbeque experts – Marcus Bawdon, the editor of a magazine about barbeque cooking, and barbeque catering specialist DrSweetSmoke – both helped with design input with the knife.

The result is a knife that cuts easily through barbeque ‘bark’ on the outside of the meat (eg crisp pork crackling) thanks to its serrated edge, and with just the right amount of flex in the blade to make single stroke slicing easy. 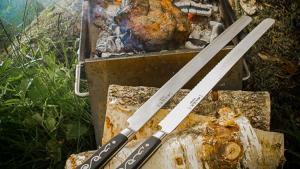 Another 360mm knife, the Miho (‘Miho’ is a girl’s name in Japan that means ‘beauty’) was also designed in collaboration with Marcus Bawdon and DrSweetSmoke.

It is again multi-purpose and is suitable, for example, for slicing meat and raw fish. The flat edge is ideal for cutting even slices of large pieces of food with minimal flexing in the blade.

At the barbeque the Miho is a great choice for slicing through big hunks of beef, especially brisket.

Next up we have the Niku – an interesting knife indeed. 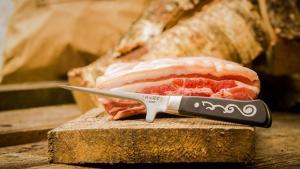 Designed by Chef Karim Maoui, who also designed the Maoui Deba, the Niku is a 150mm thin blade boning knife most suited to intricate butchery work.

The handle has been inverted to make it easier to hold and to avoid too much pressure on the palm. Two top UK based chefs – Michael Wignall and Tommy Banks had very nice things to say about this new addition to the IO Shen range:

‘A serious knife for serious butchery.’ Michael Wignall
‘A class act and essential for any chef who butchers.’ Tommy Banks

Designed by UK chef Wayne Sullivan, the 270mm Suraisu (which simply means ‘slice’ in Japanese – the Japanese version of the English word) has an extended curve in the blade designed to mimic the natural movement of the arm when slicing. It has a ‘tanto’ style tip to make precision slicing easier.

UK chef Mark Poynton says that the Suraisu is ‘the most perfect knife I’ve ever had the pleasure to pick up’, and Daniel Clifford reckons it’s the best slicer he’s ever used. 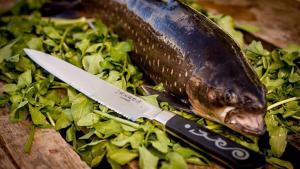 ‘Ryoba’ is Japanese for ‘double edge’, and that’s what this knife is.

Designed by chef Daniel Clifford at Midsummer House in the UK (hence the name ‘MSH’), the 195mm Ryoba is specifically for fish filleting and preparation and carving meat. The blade has a serrated edge near the heel, which is for use on poultry and fish bones.

UK chef Tim Allen says it’s his favourite knife for fish work as it has ‘great balance and precision’.

And the last new addition to the range is the… 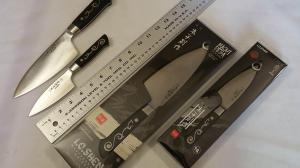 So quite a smorgasbord of new knives for you. Which will you pick? Or maybe you should just get the lot!