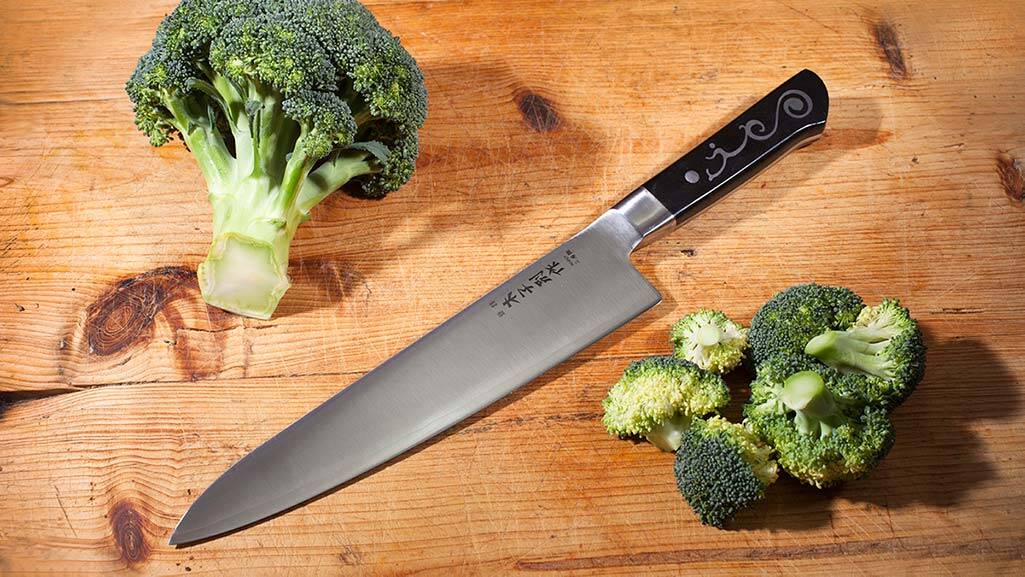 If you took your average Aussie bloke from 20 years ago and catapulted him into 2015, he would probably be deeply mystified by the current Australian obsession with all things food.

Whereas meat and two veg and deep fried everything was perfectly fine fare twenty years ago, now seemingly everyone is watching Masterchef and My Kitchen Rules and swotting up on the finer points of how to (re)create cuisine from around the world.

We haven’t done any form of research on this, but our guess is that 50% of all programs on the TV these days are something to do with cooking.

As the Australian palate has ‘refined’, so have the tools that are used in the kitchen. And this kitchen revolution has not missed that most basic of kitchen implement, the chef’s knife.

In the past the professional chef’s weapon of choice in a commercial kitchen was a standard British, or maybe German made knife. Over the past few years these traditional European style knives have given way to the current king of knives – the Japanese style knife (like our very own I.O. Shen range).

Undoubtedly some of the reasons behind this – at least as far as Australia is concerned – are related to the increasing influence of Japanese and Asian cooking. The popularity of sushi is a case in point – it’s much easier slicing fish with a Japanese style knife that’s actually made for the job.

But there’s more to it than that, since the rise and rise of the Japanese chef’s knife is happening not just in Australia, but around the world, and particularly in the US.

Some trace the popularity of the Japanese style knife – at least in the US – to chef turned TV restaurant critic Anthony Bourdain, who wrote in glowing terms of the benefits of Japanese style knives in his book Kitchen Confidential.

Although all knives essentially derive from swords and other weapons (see our previous article here), it is the Japanese knife making tradition that has stayed the truest to its military origins. As we described in an earlier article (How an IO Shen knife is like a Samurai sword), Japanese knives are made so that softer and less brittle steel is moulded around an inner section, made of more brittle but harder and sharper steel, which protrudes as the cutting edge. And this is how I.O. Shen knives are made as well.

So ability to retain a sharp cutting edge is the first main advantage of the Japanese knife. The second is simply that Japanese knives are lighter than their European counterparts – something that – as Alvin Teo explained here – helps make it a less tiring exercise for a professional chef who might spend half of his eight hour shift chopping things up.

Finally, and again something that might be traced back to its military origins, Japanese knives are made to look beautiful. An ornate Japanese knife just looks the part, and encourages the owner to pick it up and use it.

Have we missed any other reasons for their popularity? Or maybe you’re a fan of the German style chefs knives. Either way let us know in the comments below.